Cube'a'Lingus is a block-matching puzzle platformer set in a modern day hell. As one of Satan's ex-imps, you are to escape and find redemption in heaven. Traverse the puzzling, industrial hellscape from your worst fever dreams.

Along with the other designers, I structured and designed the puzzles and gameplay.

The idea of combining grotesque boxes to achieve a desired effect took shape early, but the combinations and their functions were decided on later. We wanted a strong and memorable puzzle for use throughout the entirety of the game.

The puzzle system came down to the cubes and their combination, but what we were uncertain of was wherein the challenge lied. Basically - What was the puzzle?

We knew we wanted an instigator cube and a receiver, and be more than simply placing one cube next to another, so we decided on a few factors:

- Singular Combos - one face for another face. 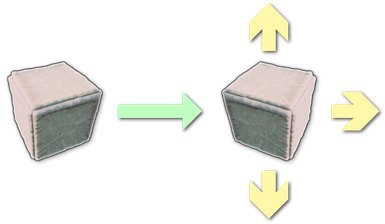 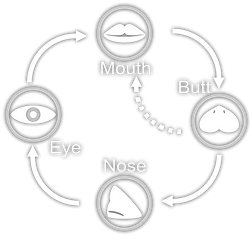 With the theme of being in hell, we didn't want the combination to be fully predictable but still memorable. After many design sessions we ended up with the following facial key combos. 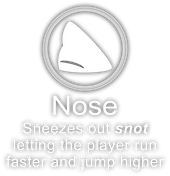 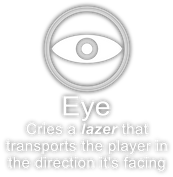 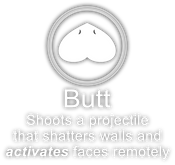 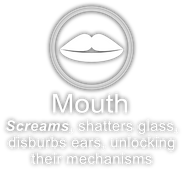 With the rules and combinations done, we went on to design the effects of the Cubes and their interactions with the platforming. It was at this point that I began prototyping and testing the variation of these systems.

Apart from prototyping, I linked programming and design, made modular blueprints to make life easier for the other designers, while implementing and balancing the work of the programmers and artists.

This role required a diligent overview of the work of both divisions to ensure we were working on and following our priorities. This blended perfectly well with my tasks as scrum master.

Much of the prototype was refactored in C++ for optimisation's sake, thanks to the awesome programmers on the team.

The remaining blueprints were organized according to my 3-step strategy:

With varying complexity all blueprints followed this strategy, keeping them clean and adjustable.

One example is the 'Checkpoint & Respawn system'. The level designers would simply place the actor in the level and be done.

The respawn point was invisible to the player, but visible in the editor. 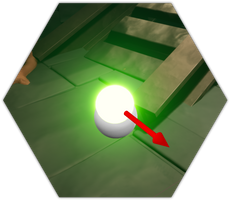 With a modular core, the blueprints were made to ensure that tweaking was as accessible as possible, decreasing the other designers' load.

As I enjoy organization and management, I wanted to try out a smaller organizational role, so that I could focus on the craft. I chose to apply as a scrum master instead of product owner. My responsiblities were:

This project was done entirely online during the height of the 2020 pandemic, which brought on challenges. Particularly, how the team shared ideas and held meetings. In my case it was tracking tasks, holding these meetings and follow-ups.

The team's base of operations was our Miro board, where we conducted much of our work and meetings. It was a different experience to be sure, but with its own rewards. 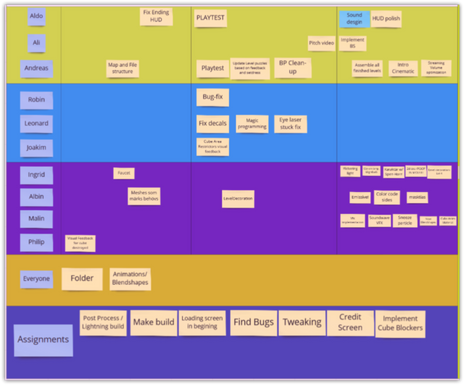 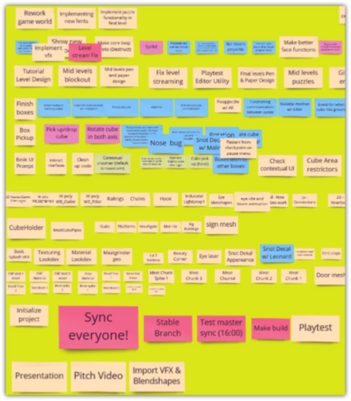 I was also in charge of Game Plans, which were the "put out fires", organize relief, and construct emergency procedures type of things.

Since online issues were abundant, this work was unfortunately repeated, but invaluable. I took it on myself to learn how to handle project crises constructively, such as "The Version Control Catastrophy".

Since we did not have access to Perforce, we initially used GitHub Desktop. Since this software broke down on us multiple times, we switched to a hybrid of Sourcetree, Fork, and GitHub. With the assistance of a few seniors, I handled the migration, and helped out wherever needed.

What I am proud of

Second, the deep dive into technical design - implementing the mechanics and fine-tuning them, while maintaining a constant cadence.

Third, connecting programming and design as scrum master. It was fulfilling, I was always kept occupied, and I enjoyed every second of it.